Wow! This was such an awesome, busy Christmas I have finally caught up on my napping (I missed a lot of my naps) and am ready to tell you all about it!

Events started Sunday when Uncle R called and said he was on his way from Virginia with The Thing, could he stay with us. I tried my hardest to convince Dad to tell him no!, but Mom reminded me Santa Paws was still watching and he doesn't like when puppy dogs are mean to their cousins. I said, "Well Santa Paws never had The Thing as his cousin!"  A few hours later Uncle R and The Thing came through the door. 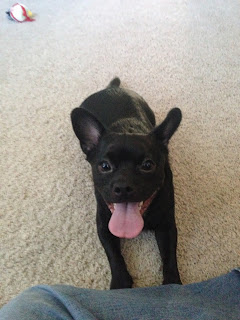 How Derpy hasn't bitten that stupid tongue off yet, I'll never know.

Stuff happened Monday, but none of it involved me, except for the car ride to pick up dinner that night. We went to the fry store, but I didn't get my own order this time :(

On Tuesday, the best thing happened! Grandma and Grandpaw came and they brought Mawmaw and Pawpaw! They sneak me most of the treats. A few hours later, Uncle R left but forgot to take The Thing. Boo. He came back with The Blur (The Thing's sis-fur). Apparently all dogs stayed at my house for Christmas. A little later, my other Grandma and Grandpaw came with Emma. Just to keep everyone in the loop, we were up to 4 dogs and 9 humans. Lots of treats were had! 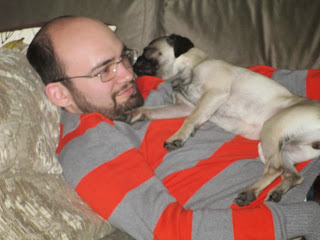 Uncle R and The Blur after her batteries ran out 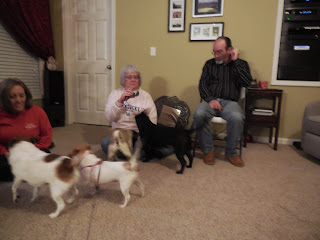 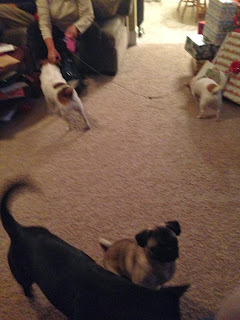 It's hard getting 4 dogs to sit for a picture 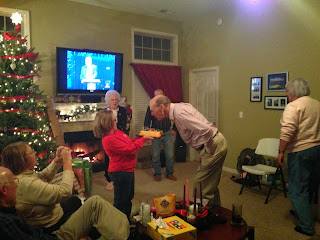 Christmas Eve is also Pawpaw's birthday, so we had cake...wait, the humans had cake. Dogs got nothing.

We had to go to bed early so Santa Paws could come.  I was nervous The Thing and The Blur would scare him off, but when we woke up, the tree had a billion presents! I felt like Randy from A Christmas Story ("OH boy! That's mine!"). The humans ate breakfast first, but it involved food, so that's OK. 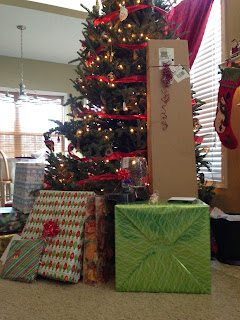 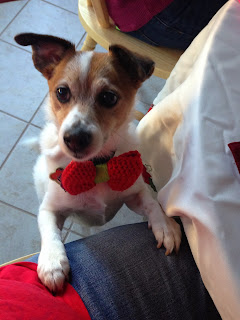 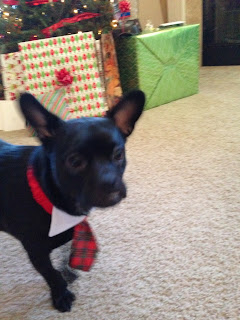 The Thing wore his tie too. Copy-Cat. 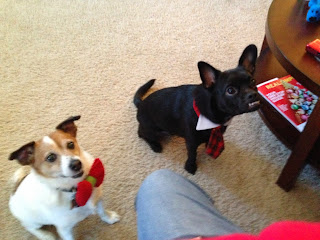 Dress-up picture. Check out The Thing's underbite! He gets derpier by the second! 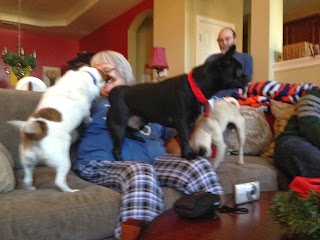 Bet you can't tell who gives the dogs the most treats!

It was finally present opening time. I got a bunch of treats (of course), a new food dish, and a new water thingy that has a bottle to hold extra water and it lets a little out as I drink it. Now I don't have to herd Mom and Dad into the kitchen when my bowl is empty! 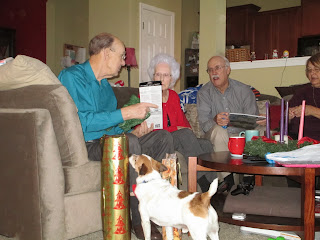 I helped Mawmaw and Pawpaw 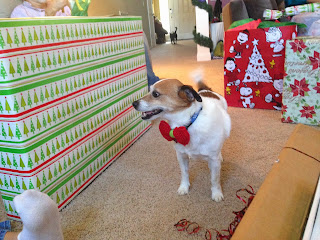 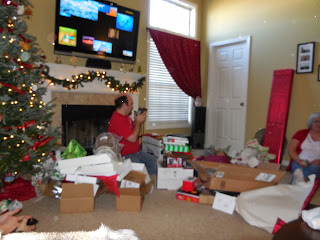 That's a big mess. And it's not my fault! 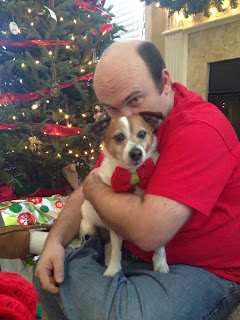 I hate you sometimes, Mom. I blame Uncle R and J for giving me the antlers. Now I know how Ralphie felt in the bunny costume. 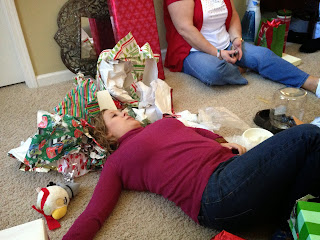 After presents, I had the most important job--helping Mom cook Christmas dinner! I take my job as sous chef and janitor very seriously, but all those extra dogs kinda cramped my style. But it was Christmas and I was feeling generous, so I didn't get mad.

The rest of the day was spent eating and begging and talking.  Everyone went back home (and took their dogs) on Thursday and I've been trying to catch up ever since. The good part is Mommy only had to work Monday, so I've really enjoyed having her home. We're catching up on all of our snuggling! 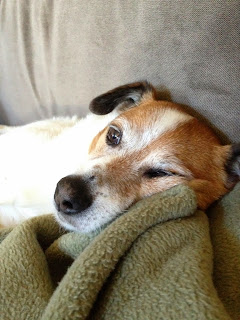 On behalf of my family, I (and Stella) wish you and you family a very merry Christmas (Festivus, Solstice, whatevs). I will be sure to recap the most amazingly best week ever...once I've caught up on my sleeping! 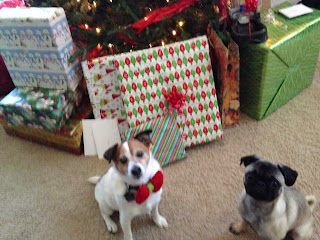 The second greatest holiday is quickly approaching. Christmas is in less than two weeks. Christmas is the holiday Santa Paws brings your presents, lots of people are around to sneak you food and everyone has a big dinner! You are probably saying, "Mister, if it has all that, then why does it come in second?"

I'm glad you asked. I rank Christmas second because unlike Thanksgiving, Christmas is also a very strange holiday that I don't completely understand. First, humans bring a tree inside the house then expect you to NOT pee on it. Then, Santa Paws brings presents, but he drops them down the chimney, where they get dirty. Plus, you're not allowed to bark at Santa! THEN, humans have to do lots of stuff which takes their attention away from you. Finally, lots of people ring your doorbell to leave packages. That doorbell is my arch nemesis.

So that's why Christmas is second. Too confusing to be first, but way better than Halloween or Firework Boomie Day (also called the Fourth of July).

I got a great surprise today. My daddy stayed home from that work place. Mom still had to go though, but I decided to give Dad an early Christmas present. I was a very good boy! My day started like normal. Mom gave me the B word (breakfast in case you don't speak Mister) and took me on a W-A-L-K. But Dad was still in bed! Once he was up, Mom was ready to leave for that work place. So Dad took me on a c-a-r r-i-d-e. 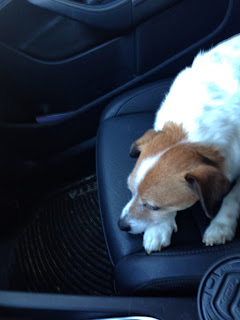 When we got home, I didn't even notice Mommy was missing until way after Daddy finished the B word. I still got up on the couch with him. Until the Wood Guy rang my doorbell. He left us lots of logs for the fireplace. Then, I got back on the couch until Mom came home for lunch.

The best part is after Mom went back to work (well, that's not the best part), but I stayed on the couch the WHOLE time. Even when UPS Guy rang the bell. Dad told me to stay and I did. I never left the couch the entire time Mom was gone. 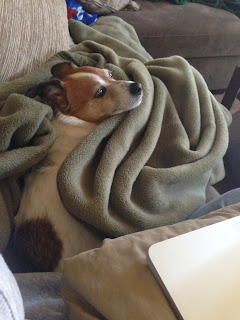 See? Snug as a bug in a rug

Friends, that is HUGE news for me. I hate nothing more than when Mommy is gone and it doesn't really matter if Dad's there or not, so for me to not pace and whine is a big deal, let alone relaxing on the couch!  Mom says I've earned extra Santa points AND big bed privileges!

I love getting Pee-Mail! My tree is mrappgate (at) gmail (dot) com. Sometimes Mommy hogs the computer though and forgets to let me check it, so I may not pee back for a little while. I will though. Puppy dog's honor!