I have to warn everyone about something very dire. The worst of all the days...except for maybe the Fourth of July...is approaching. A day where ghosts and goblins roam the streets and ring your doorbell. And they don't even have the courtesy of delivering a pizza or Chinese or ANYTHING! A day where your mom makes you wear a ridiculous costume while your dad feels sorry for you. 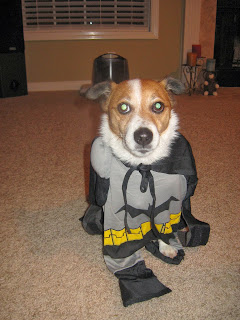 My first Halloween home. I am Batdog.

Oh, the whole holiday sounds great. Pumpkins are yummy and the weather is cool and it's a holiday devoted to performing tricks to get treats. I'm going to let everyone in on a secret: IT'S ALL A SHAM!!!!! Don't believe the humans. It is the WORST holiday for all the reasons I outlined above. 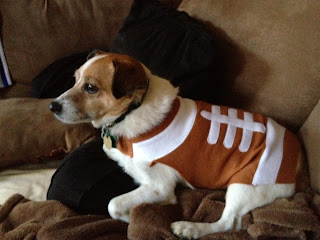 The next year I was a football.

The good news is the terribleness only lasts a little while. Then the city says, "Turn off your lights and pretend your not home!" Then you get to look forward to the greatest of all holidays: Thanksgiving!!!!!!!!! 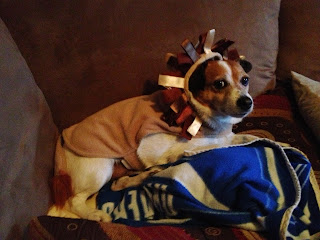 And last year I was a fur-ocious lion

Just be careful of zombies roaming downtown. I ran into some here and then here. I haven't seen anything year though. Mom says I just lucked out because she and Dad saw some. 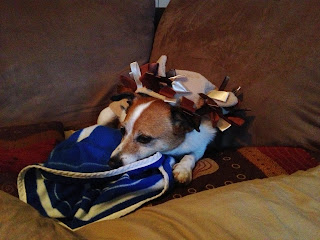 I hate this stupid holiday.

I can only imagine the travesty that will be this year's costume.

Wow. Today has been an especially crazy day. This morning, my people ate their breakfast in the living room so Dad could watch the DVR of the Kentucky Wild(kitty)cats Big Blue Madness from last night. That really threw my morning all off, but I did like sitting on the carpet instead of the cold tile. The temperatures have been dropping lately and the tile is extra cold right now!

Anyway, after forever, Dad finally said we could go on a W-A-L-K. Hooray! It drizzled the whole time, so I had to get wiped off and I hate that part. But I love W-A-L-Ks more.

Then, I got the best news: Grandma was coming to visit! Hooray! Both of my Grandmas always bring me treats so I love them.

Right after Grandma and Grandpaw got here though, the worst thing happened. The Thing walked in the door. I thought I got rid of him! The even worst part was, he had a second thing with him! At first, I called her The Blur because she. Wouldn't. Stop. Moving. My humans kept calling her "Stella," but I'm pretty sure it's The Blur. Uncle R says she has to have surgery next month and that might slow her down a bit. I'm still calling her The Blur until then. 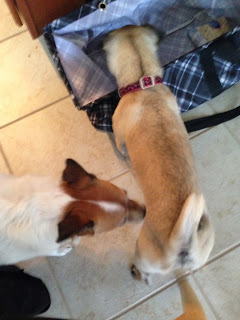 Checking out The Blur while she's still 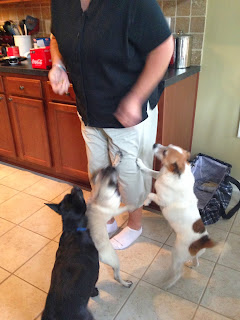 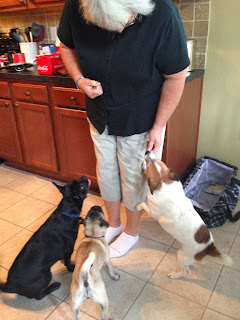 I'm her favorite because I take treats gently. Unlike certain OTHER dogs (pictured)

Turns out though, The Blur is a pretty handy thing to have around (and he was only here for a visit this weekend) because The Thing didn't bother me one bit! They chased each other and romped and fought over toys and never once tried to make me play. Which was good, because their fighting made me kind of nervous. I even shared my toys with them...even though they destroyed some of them. It's cool. I don't really play with them except when I get the occasional "wild hair up my butt." That's what Mom says anyway. I'm not sure what that's supposed to mean. 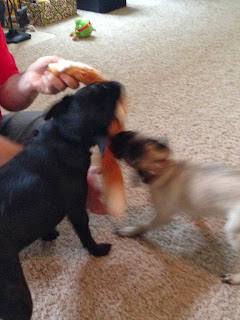 The Thing and The Blur playing Tug... 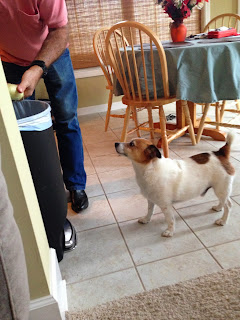 ...while I help Grandpaw in the kitchen 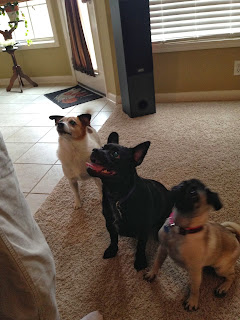 Treats, Grandma? P.S. Mom is very impressed with herself that she got this shot! 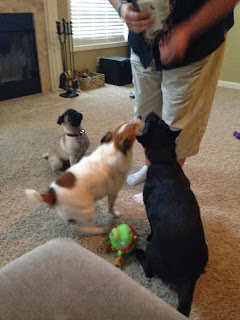 The Thing, The Blur, Uncle R, Grandma, and Grandpaw all left eventually and we settled in for some football. Dad's team didn't play today, but Mommy's Tigers won their game. Mom was very excited, but I was scared because she was cheering so loud. She said she was sorry and gave me ear scratches, so I forgive her. 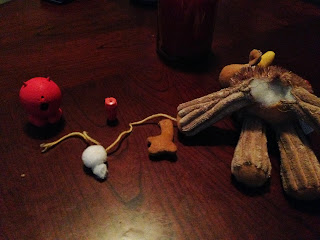 Since I was so good for The Thing Blurs, and because it's supposed to be super cold tonight, Mom and Dad have already said I can sleep in the Big Bed! It's going to be the best weekend ever!
Posted by Mister at 9:57 PM 5 comments:

Today was the best day ever! First, when Dad's alarm buzzer loud wake upper went off, Mommy got up and gave me breakfast. I love breakfast! Then, Mommy and I went on a w-a-l-k even though the sun wasn't even awake yet. We've been doing that a lot lately. Can't say I'm a fan, but I love w-a-l-ks, so I go along with it.

Then the day took a turn for the worse when Mommy went to that work place. But she came home with a bunch of bags all filled with food, so I forgave her!

Then, comes the best part: After all the foods were put away, she said, "Mister, would you like to go adventuring and visit Daddy at work?" I said, "Daddy needs all the help he can get at the work place and I'm just the puppy dog to help! Do I get to ride in the car?" And Mommy said, "Yes!" But I was already in the car. BOL!

Turns out Daddy didn't need much help at work, but we did go on a w-a-l-k downtown where I did something new: We got lunch from a truck. Normally I hate trucks because they're loud and I'm pretty sure they're trying to eat me. But this truck handed out FOOD! Maybe trucks aren't so bad! 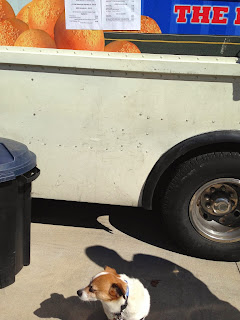 I didn't freak out because this truck gives us food!

Mom and Dad took their lunches back to Dad's office and we ate in a nice shady area just outside. I got a few French Fries for my trouble, naturally. 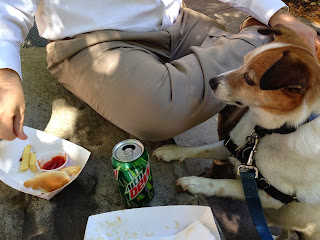 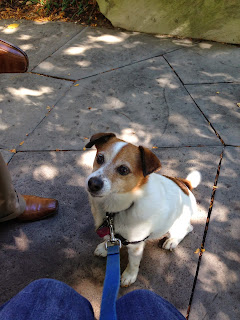 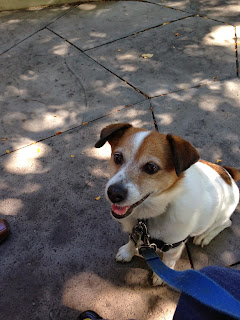 After lunch was done, Mom and I went back home and Mom said, "Mister, would you like to get in the big bed?" I said, "But Mommy, the sun's still awake. it's not time for bed yet." Mommy said, "I know." So I said, "Oh ok." And she gave me a boost into the big bed and we both fell asleep. 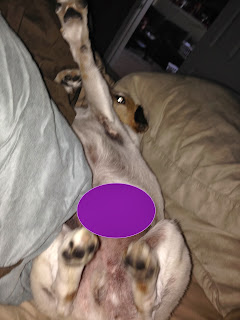 Stretching after a nap. Modestly, of course!

I think Mom has her inside clock messed up, waking up before the sun and going to sleep before the sun, but it's just a normal day for me. Plus, that meant I didn't have to keep an eye on her. Dad depends on me to keep her out of trouble when he's not home. I'm so worn out from napping, I think I'll turn in early!
Posted by Mister at 11:29 PM 3 comments:

Today is the very greatest day ever and it's not even noon! I didn't have high hopes for today since last night we went to the fry store and we didn't get any. I'm pretty sure that's because all the politicians in Washington are hoarding them while they don't do whatever it is they're not doing.

But when I woke up today, I got butt, ear, and head scratches from my dad. He also has a mean chest rub. It's the perfect way to start your day. Then, we snuggled for a minute then came rough housing time! We usually play "Steal the Bone" and I gently gnaw on Dad' hand. We like it.

But THEN came the really best part. My people decided to make pancakes for breakfast! At first I was mad because Mom only gave me a little bit of my breakfast. But then Dad had my own short stack ready! 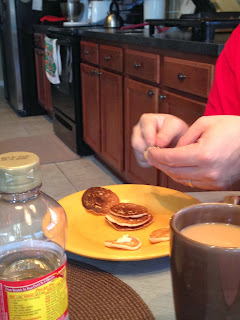 Dad even put a little bit of butter and syrup on them! 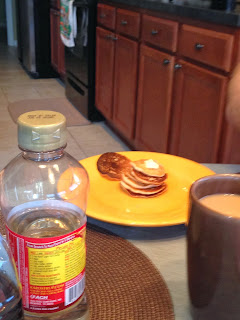 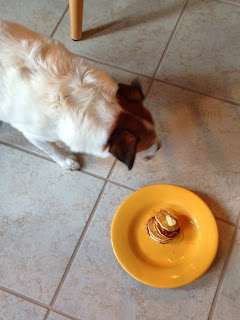 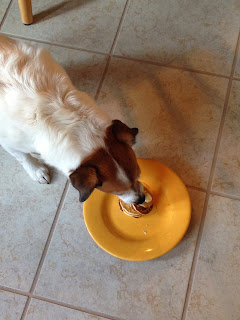 And I cleaned my plate about 30 seconds later.

Now it's time for laying on the couch and watching football all day. My perfect Saturday!
Posted by Mister at 11:30 AM 2 comments:

Song writing is something that's in my blood. Maybe it's because my grandpaw-rents live in Nashville, the capital of country music. Or maybe it's because my mommy is from the "Shoals area." Mister's Mom: There's even a new movie out about the area she was born and raised in. Look up Muscle Shoals on iTunes. We're watching it this weekend. I'm from right across the river. 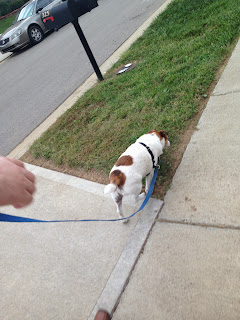 Mommy, my blog. You have your own, remember? That one you haven't written on for like a year? 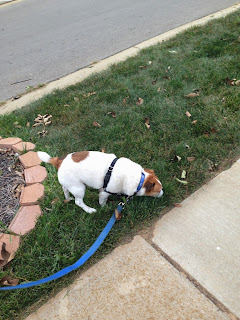 Anyway, like I said, song writing is in my blood. This morning on my walk, my tags were extra jingly. Usually Mom keeps them taped together so they don't make such a racket, but the tape has broken. That's ok because I got inspired to write a song! I only have a little big so far, but thought I'd share with you. My mommy took pictures and a video during my evening walk to go along with it. 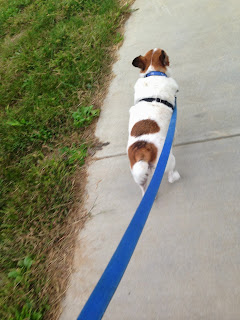 Tags jingle jangle down the street

I sniff every blade of grass I meet.
Plant or dirt, dog or tree,
The dogs all bark cause I am free!
Well, not really free since I'm on a leash
But why do dogs sniff me THERE, sheesh!

I love getting Pee-Mail! My tree is mrappgate (at) gmail (dot) com. Sometimes Mommy hogs the computer though and forgets to let me check it, so I may not pee back for a little while. I will though. Puppy dog's honor!